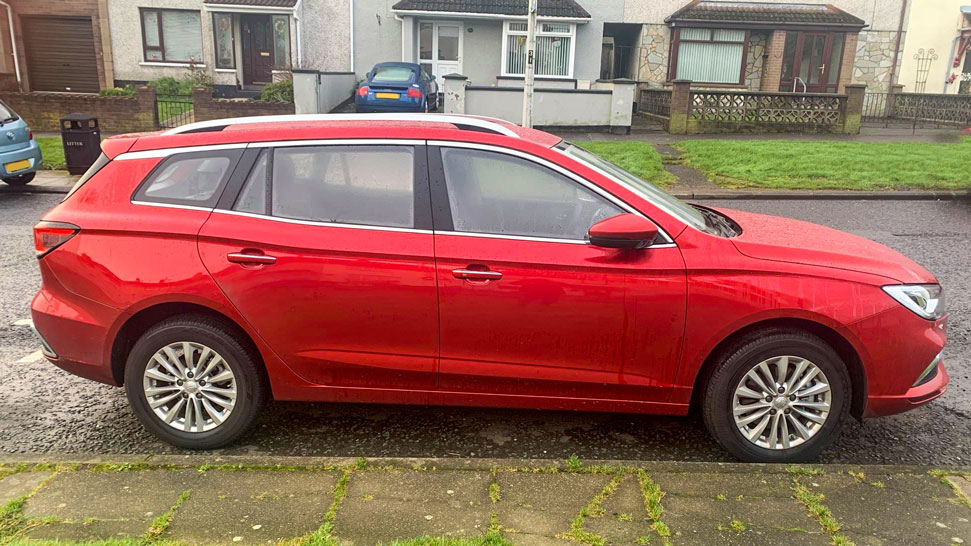 I had previously been driving a Mazda CX5 but with my PCP deal coming towards an end, I had been wanting to move to an EV. Despite wanting to go electric for all the obvious environmental benefits I also needed to be careful that I could afford the car I chose.

While I would love to have grabbed a Tesla, Polestar or an I-Pace I knew realistically they would be currently out of my range (maybe next time), so I started to look at the likes of the ID.3, Corsa E and the Peugeot E2008 as being closer to my budget.

Another consideration was going to have to be range and with no ability to charge at home I needed something in the region of 200 miles. It was then that I came to look at the MG models – the ZS and the new MG5 which I think is basically a slightly tweaked Chinese Roewe i5.

Prices were certainly at the cheaper end of the market but I thought that I would take the MGs and the Peugeot out on a test drive to see what suited best. Despite the Peugeot being a lovely car to drive the price they were looking was significantly higher that the MG so the decision came down to the MGs and despite the two different car styles the MG5 won out due to the mileage consideration.

I originally went for the Westrminster Silver option and was told it would be March before it came in (which i was happy with). But about 2 weeks later they offered me the Red (demo) at £2k less and immediately went for that.

I picked up the MG in late November and I have to say that (apart from the well known issues with charging in Northern Ireland) I have been delighted with it so far.

Despite MGs of the past having some dubious build quality I have found this one to be very well build with no rattles or creeks so far. Whilst the interior certainly feels a bit more plastic compared to the Mazda, in the Exclusive trim the fauz leather is more than acceptable and the plastic areas are not over the top and noticeable. Driving is very solid and I have had no complaints, it holds the road well and I haven’t notice too much in the way of body roll.

The car has 3 modes Eco, Normal and Sport. Acceleration in sports mode is the most aggressive and with a 0-60 time of around 8 seconds I would say it’s more than enough for our roads. You would class the entertainment system as a cheaper Chinese type unit, but I would say in all honesty I have no issues with it and in fact I would class it as far superior to the one in my Mazda. It has all the usual functions – Music (DAB and FM, Satnav and Apple/Android Carplay.

Some people have criticised the responsiveness of the unit, but again in my opinion, there are no issues and it’s more responsive than the factory fitted system in the Mazda. Range wise – it is claimed 211 normal and approx 277 city. My normal journey is mainly A roads and motorway so can’t comment on the city driving, but I would say that it gets around 190 – 200 on my run (but I am not a particularly aggressive driver). Boot space very good – there is a lip but I rarely have a need to worry about this.

It does steam up inside in the wet very quickly, that won’t be an issue in the summer but I would say in my normal run of around 20 miles I will briefly have to put the blower on about 5 or 6 times. In saying that a few seconds and the windows are clear. The heated rear window does not clear very quickly.

Whilst silent on start, I would say it’s not the quietest of EVs for road npise, but again very little that I would complain about.

You need to be very careful with wheelspin if you are taking off from a stop in sports mode.

If I had one major complain it would be the Rearview Camera. The camera itself is very poor. You get a good wide view on the screen when reversing but as soon as it goes dark you can see virtually nothing. If it was easy to swap out the camera I would do it in a heartbeat.

Like most cars these days there’s no spare tyre and it only comes with a puncture kit. There is a special place in hell for the person that created these.

Overall I think the MG5 is a very good introduction to EVs. It is a very affordable car, comes with a decent level of kit in both Standard and Exclusive models and with its 7 year warranty any concerns about build quality etc are pretty much at the back of my mind.

When my current deal is up I would have no hesitation in going with a new MG EV.