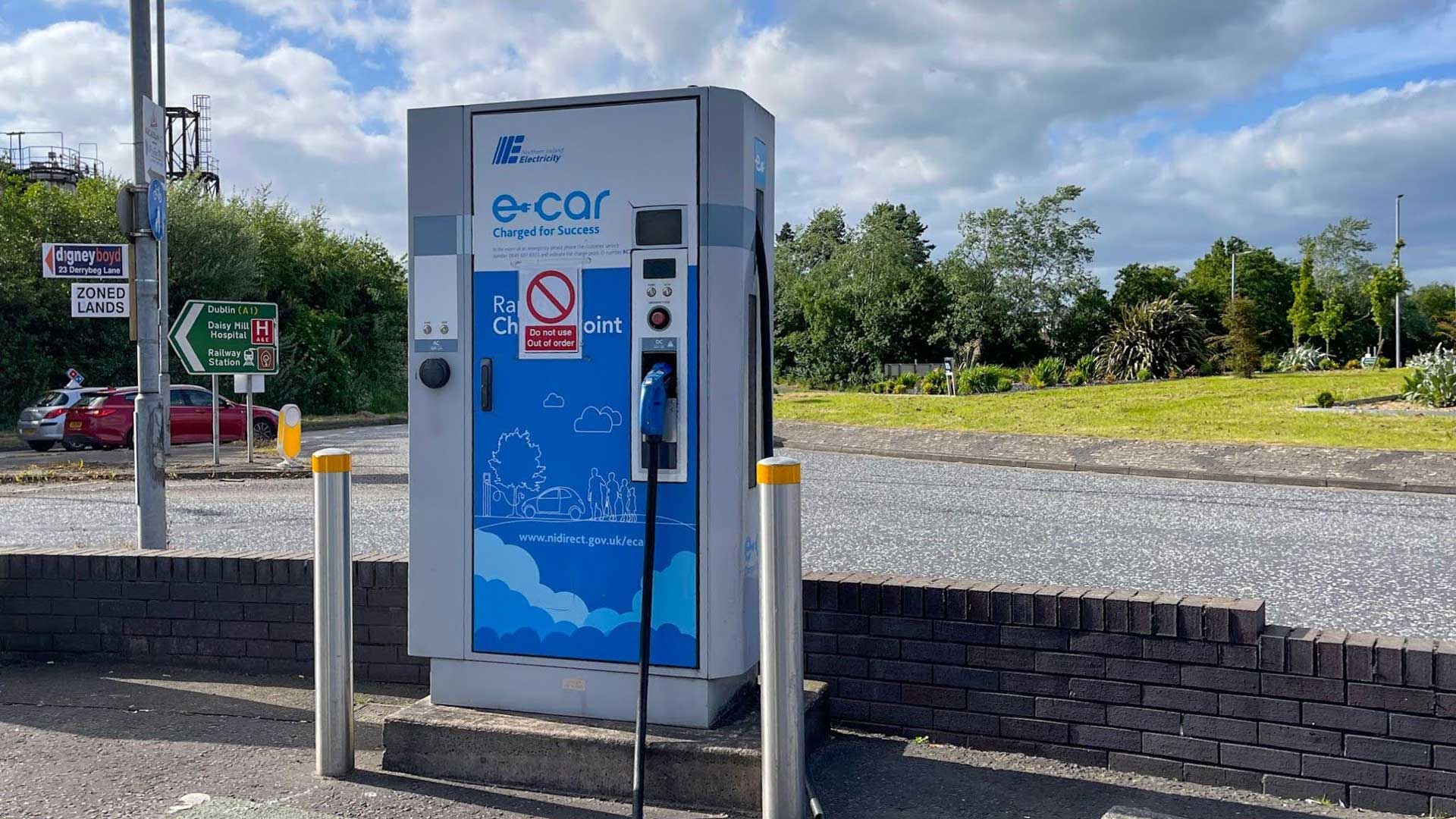 We sat down with ESB representatives on the outskirts of Belfast on Tuesday 16th August. The meeting agenda covered 2 main points, the LUF (Levelling Up Fund) project to replace and upgrade the ESB charge points around Northern Ireland and turning on Pay-to-Charge here.

On 17th November last year ESB announced they had been awarded £3.27M from the Levelling Up Fund which would “Transform” their EV Charging Network in Northern Ireland. The following month (15th December 2021) ESB representatives were questioned by the Infrastructure Committee, stating that…

I think it’s fair to say that we’ve been quite uncomfortable with the state of the network in Northern Ireland over the last 2 to 3 years.

…around upgrades and hub sites I would be very hopeful in a couple of months [ie February 2022] to have a number of them signed and we’ll be in a position to be able to share that publicly and indeed a timeline for the 1st wave or 2 of the replacements…In terms of time lines the project will begin in Q1 next year [2022].

Nine months after the ESB press release we are still waiting for anything to happen. In February ESB told us the first new equipment was due to be delivered around May / June this year and said once it arrived, work would start immediately. Whilst there are worldwide supply issues, these are not new and were present in February when these dates were given. We also note that multiple new rapid chargers have been installed in RoI during the same period.

Regarding this project, ESB have provided us with the following update this week;

In late 2021 ESB ecars received notification that we had been successful in securing funding from the Levelling Up Fund which would allow us to undertake a far reaching EV infrastructure upgrade project in Northern Ireland.  The details of this programme of work were outlined to EVANI members during a webcast event during February 2022.  The LUF funding, along with a proportion of investment from ESB, will allow us to significantly modernise and strengthen the current EV charging network by upgrading all charging points in strategically important locations and adding next generation charging hubs to the network.

o As a brief recap of scope, the rejuvenation project includes:
o Replacement of 100 22kW AC Fast chargers with modern, reliable units
o Upgrade of 20 current 22kW AC Fast chargers to 100kW Rapid chargers
o Replacement of 7 existing 50kW Rapid Chargers with 100kW Rapid chargers
o Introduction of High-Powered Charging (HPC) for the first time in Northern Ireland. Five new multi vehicle HPC Hubs will be constructed on priority routes. These hubs will all be capable of charging multiple vehicles simultaneously and will be able to provide drivers with 100km of range in as little as six minutes.

Orders were placed with our suppliers in early 2022 for the 100 Fast chargers and 27 Rapid chargers referenced above with the expectation that these would be received by the end of H2 2022, and that deployment activity could commence soon thereafter.  Due to global supply chain constraints, as widely highlighted in the media, the delivery of these units has been delayed.  The current expectation being that these units will now be received from Q3 2022.  Our intention is to begin with the replacement AC Fast chargers, focussing first on the worst performing units on our network.  We are fully aware of locations where older chargers have been unavailable or unreliable for long periods and we will target these locations as a priority. Our expectation is that we will deploy 20-30 of these units before the end of 2022.

Regarding HPC hubs, a number of suitable sites have been identified and commercial proposals have been issued to a number of potential site hosts.  Unfortunately, with discussions ongoing we are unable to confirm any HPC hub locations at this time.  However, we remain confident that we will be able to reach agreement with a number of locations over months and that work on hub sites will commence in early 2023.  In the meantime, we remain open to all suggestions of potential HPC locations in NI.

If ESB are successful in installing 20-30 (of the slowest) chargers by the end of 2022, that will represent less than one quarter of the project, more than a year after their announcement. Meanwhile long-term issues like Derry/Londonderry, Dungannon and Enniskillen drag on month after month waiting for this work to commence.

We were also told that all ESB Rapids in NI would be replaced with 100 kW units. This was to including the 6 rapids temporarily replaced (Sprucefield, Boucher Road, Shore Road, Templepatrick, Portrush and Enniskillen) as confirmed in this video (from 42:45 to 45:10), but it is unclear from the statement above whether these sites will now be replaced by 100 kW units?

With regards to turning on pay-to charge here, ESB told us…

The programme of work required to implement paid-for charging in NI is progressing well and we have a project team working towards its implementation. We have seen from our experiences in the Republic that the introduction of fee-based charging led quickly to a much better availability on the charging network and better charging etiquette by users. The introduction of overstay fees have also played a key role in keeping chargers available by ensuring that customers take what they need before continuing their journey.

Our strong desire is to retain an ‘All Ireland’ approach whereby EV drivers have a uniform experience regardless of where they are charging on the island of Ireland. This presents a number of complexities and we are currently working with our internal IT team and the supplier of our charging app, ecars connect and associated backend systems, to design the necessary changes to implement the required technical solution.

We are always happy to consult with other stakeholders, including EVANI who represent the EV community in Northern Ireland. This follows the approach taken in the Republic when fees were introduced and ESB ecars worked in collaboration with IEVOA (the Irish EV Owners Association). This helped ensure a smooth transition to paid-for public charging with the vast majority of EV owners bought in to the approach.

ESB told us in October 2021 that they hoped to enable pay-to-charge in H1 2022. Then when that deadline passed we were assured it would be done in the 2nd half of 2022. However, with no timeline in this latest statement we can only assume this will now have slipped again and won’t happen until sometime in 2023 now.

We have made it clear in many of our meetings how vital this single change is, and indeed ESB mention how effective this has been in freeing up infrastructure in RoI in their statement.

We discussed pay-to-charge at our very first meeting with ESB in 2017, so considering the years leading up to this inevitable change, it’s baffling to us how the organisation could not have been more prepared for this transition.

ESB ecars remain committed to delivering both of these programmes of work which will enhance the experience for EV drivers in Northern Ireland significantly in comparison with the status quo. We face a challenging environment and timescales, but we are committed to delivery. We will provide further progress updates over the coming months as we progress.

We would call for ESB to make the details public around the “challenging environment” they mention so we can better understand what hurdles need to be cleared. We would also remind them of their words to the Infrastructure Committee last December. –

…we feel it’s essential, and international experience would deem it essential, that we have a best in class charging infrastructure to facilitate EV uptake in Northern Ireland”.

As ESB continues to miss every deadline, how long can the company that DfI constantly refers to as “The Public Charging Network in Northern Ireland”, continue to let us down and in the process further affect investment by other Charge Point Operators?