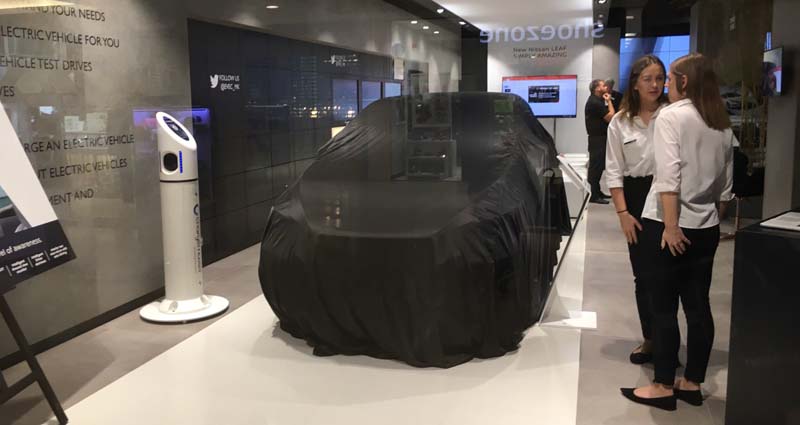 On 26th October one NIEVO member was fortunate enough to be invited to the UK release to the new 2018 LEAF in the EV experience center in Milton Keynes.Mark (@melectriccar) has shared some thoughts and pictures with us…

About 25 existing LEAF customers were invited to the exclusive UK LEAF reveal event. When we arrived the two cars were covered with the ubiquitous black sheets while we had a brief rundown on the vehicles from Nissan representatives.

This was followed by Plug in Adventures’ stories from Chris’ epic 10,000 mile Mongol Rally journey in a 30kWh LEAF from Scotland to Ulan Ude, Russia. So if anyone talks about range anxiety you can point to this as an example of anything is possible with some planning!

Then the moment we had been waiting for, the sheets came off and there was a black LEAF and a white LEAF with a black ‘floating roof’. The first thing to strike the onlooker is the conventional design, gone are the bug eye headlights and it’s hello to the now familiar V motion grille seen on all current Nissans.

There are some familiar lines on the new Leaf, the roof and the drivers door are unchanged from the current car. The major restyling of the front and rear with the addition of side skirts has made sure the car is almost unrecognisable from the current model. The lineage is detectable when you open the tailgate and see a similar size boot and aperture. Likewise the rear seats and door cards are identical to the existing model.

We didn’t get to drive the cars or play with the infotainment system but sitting behind the wheel there was that same mix of familiar elements and new features. The steering wheel is new and with a lot more buttons. Gone is the split screen dash and digital speedo right in front of you. The new dash sees the return of a traditional analog speedo but alongside a configurable screen. Apparently this was something customers were asking for, I know I wasn’t one of them.

The puck for selecting reverse, neutral, drive mode or park still exists in the same central console along with a few new buttons the ePedal button for one foot driving and an electronic handbrake, no more pushing your foot to the floor! Moving on up the central console there is a larger central console with similar heating control buttons.

The inside of the car and the exterior are quite conventional and will be acceptable to the mainstream motoring public. The big questions yet to be answered are whether the range of a 40kWh car will persuade people to forget about range anxiety and at what cost? Time will tell.

Would I buy one? Yes, depending on the finance options of course. The extra features, improved looks and increased range are all a bonus but I am happy with my existing LEAF and what I’m paying for it.

The new vehicle will start appearing in showrooms in January 2018. I look forward to driving it to experience the new motor configuration and the additional power.