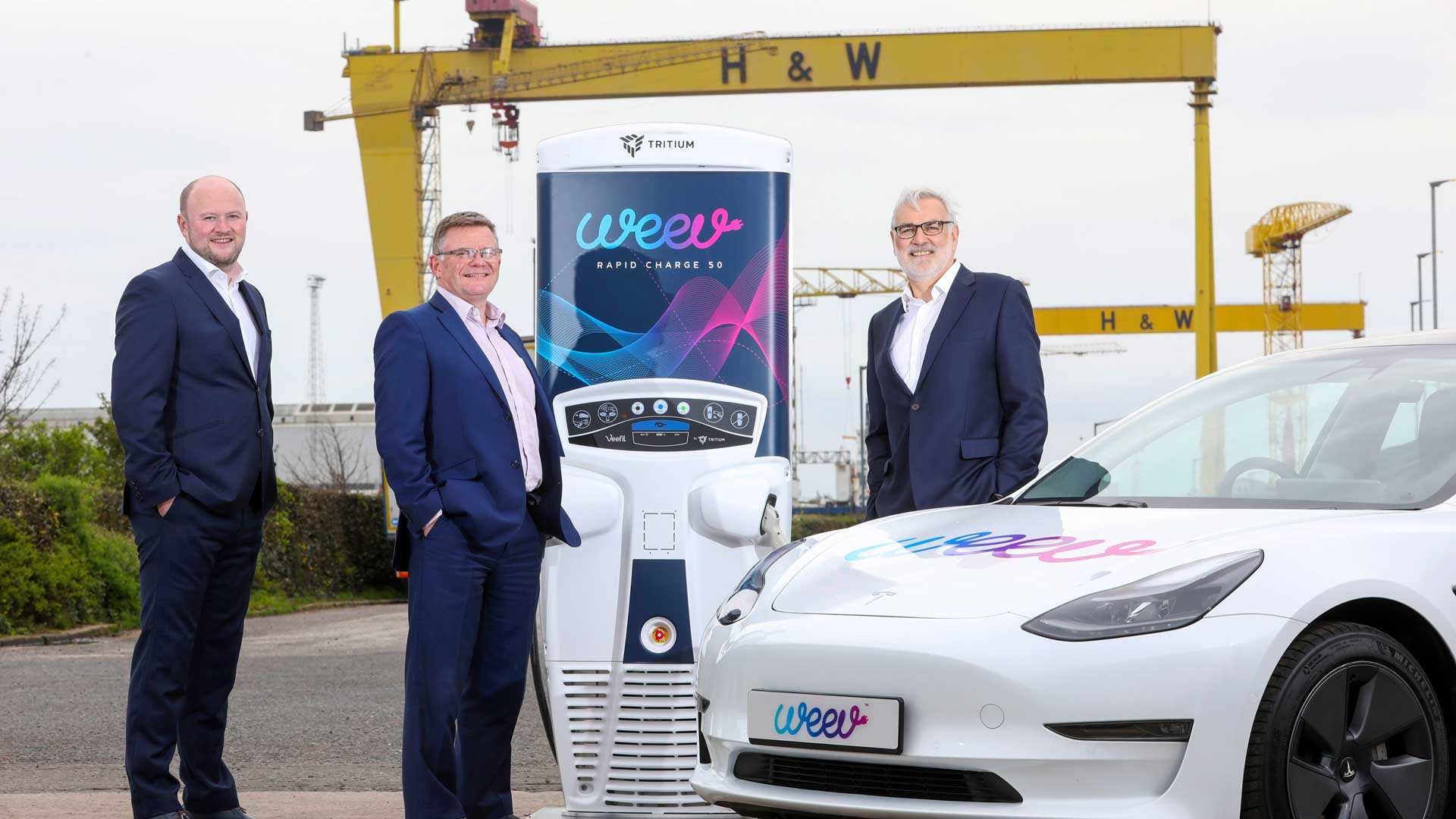 Northern Ireland has a brand new player in the EV public charging space.

Belfast based startup Weev has brought together a team of experienced entrepreneurs to launch this new venture. The company says it plans to start installing public chargers around the middle of this year and hopes to have up to 100 in the ground by the end of 2022.

Thomas O’Hagan, Co-Founder and CCO, told us the company’s £20 million pound investment will eventually bring 1,500 charging points to 350 locations around the province, including 6 ultra-rapid charging hub sites. The company aims to complete the roll-out by the end of 2024.

The Weev network will include a mix of 7 kW and 22 kW AC units along with some 50 kW DC Rapids (or faster where connections are available) and there are plans for a mix of 2 or more of these charger types at most sites. There will be App and RFID tags available to start charging and the company says contactless payments are also being considered.

Weev will also install domestic and fleet charging solutions and in addition will offer electric vehicle leasing as well as short term hire so customers can try living with an EV before committing.

We look forward to seeing their network grow over the next 30 months or so and urge DfI, DfE, the Utility Regulator and the DNO to work hard to facilitate the changes required here to ease the path for all Charge Point Operators investing in Northern Ireland.

Belfast-based start-up Weev has today announced plans to invest £20 million in a new public
electric vehicle (EV) charging network in over 350 locations across Northern Ireland.
In total, the company plans to install 1,500 new charging points before the end of 2024,
including at six major ultra-rapid charging hub sites that will see drivers able to fully ‘top-up’ their
vehicles in less than 20 minutes.

This investment will help address the paucity of charging infrastructure in Northern Ireland. This
lack of infrastructure was highlighted by Infrastructure Minister Nichola Mallon setting up an EV
Task force to seek to address the lack of commercial operators in the space.
Charging points will be available in convenient and strategic locations such as car parks. Weev
will also offer EV managed fleet solutions and leasing.

Co-founded by Thomas O’Hagan, who also co-founded IT and telecoms company b4b Group,
Weev’s management team are no strangers to the business sector having been in charge of
various successful renewable infrastructure and major commercial businesses based in
Northern Ireland.

Thomas, who will take up the role of Chief Commercial Officer in this new venture, is joined in
the executive team by Philip Rainey as Chief Executive Officer and Graeme Thompson as Chief
Finance Officer. The board will be chaired by David Gavaghan with Brian Loughran joining as
Director.

Speaking on the announcement, Thomas O’Hagan said:
“We’re delighted to have pulled together such a strong team of experienced people to help us
deliver our plan of rolling out an EV charging network for EV drivers in Northern Ireland that is fit
for purpose, maintained, and supported locally.
“With the current situation around fuel prices, consumers are now thinking seriously about the
switch to an EV, but they need to make that switch knowing that their charging requirements will
be met should they need it on any given journey.

“Our roll out has just commenced and we plan to have the first users on our network by mid-2022. In total by the end of 2024, we expect to have completed with the installation of a network
of 1,500 charging points operational in strategic locations across Northern Ireland.”

Welcoming the investment in this vital infrastructure, Mark McCall from Electric Vehicle
Association Northern Ireland (EVANI) added:
“We have been lobbying to create an environment that was investible for commercial operators
to bring new public charging infrastructure to Northern Ireland. We are delighted that Weev has
stepped forward to help make this happen.
“EV drivers in Northern Ireland have been crying out for action and we are really looking forward
to seeing the progress the company makes with its planned roll out.”