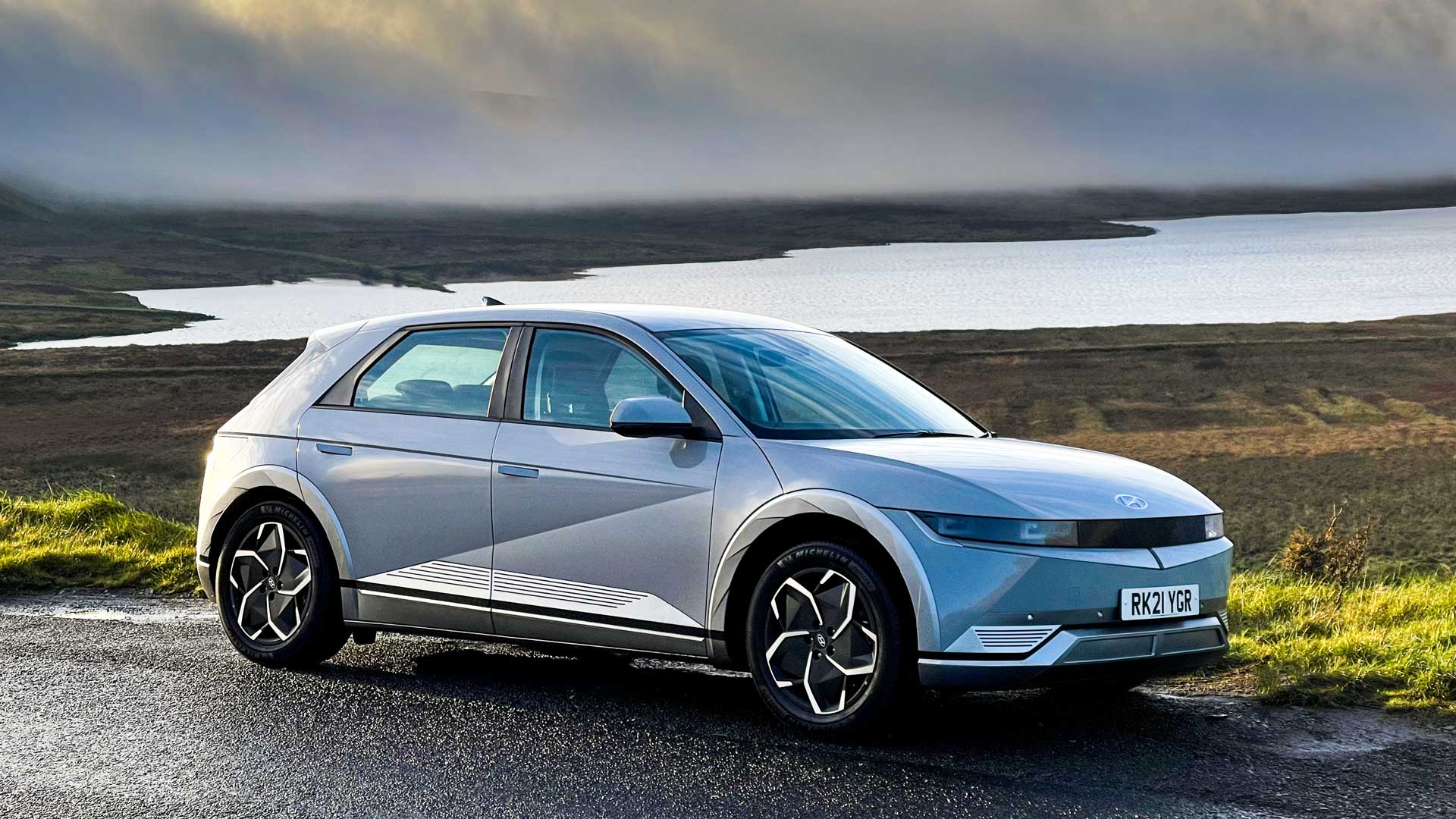 Last Friday we collected the new Hyundai IONIQ 5 from Charles Hurst in Dundonald and set off for another weekend adventure.

Last time we looked at this Kia EV6 and as we said then, these 2 cars share the same skateboard platform. It seems every review finds it hard not to compare them, and this one will be no different.

Our test model was in the Premium trim, which is the mid-spec option sitting between the SE Connect and the Ultimate. Walking up to it, the flush door handles emerge to greet you as the car unlocks without having to take the key out of your pocket. Getting in and closing the door gives you that same reassuringly quality thunk as the EV6.

The driver’s view is again dominated by the 2 large 12.3″ displays, one behind the steering wheel and the other, a touchscreen, to the left. Gear selection is via a stalk to the right of the steering wheel, rotating it forward for drive and rearward for reverse.

The interior is more conventional than the EV6 and that seems to give it a more spacious feel. While there are a few physical buttons for things like Media, Nav and Map, you’ll need to go to the touch screen to turn on things like the heated (front) seats and steering wheel. A further row of controls sits below these buttons. These are on a flat surface, so don’t offer anymore ‘feel’ compared to a touch screen, forcing you to look down still to set the temperature for example.

While the interior has a few harder plastics than the Kia it still manages to feel good and Hyundai says there’s extensive use of recycled materials in the cabin too.

The flat floor front and rear helps to maximise usable space and there’s more headroom in this car than the EV6. The rear seats slide on runners and recline too. The seats feel good in the back, with more support between the back of your knee and the seat. The power tailgate opens to reveal a larger boot than the EV6, with 527 litres of space, while dropping the 60 / 40 rear seats (manually as no levers to pull in the boot here) space expands to 1,587 litres.

There’s a single wireless phone charging cradle in the centre console, plenty of USB sockets as well as (wired) Apple CarPlay and Android Auto. Our car also had the same V2L feature as the Kia (a £365 option), which I would highly recommend, plus another 3-pin socket at your feet in the back which your passengers can use to plug in something like a laptop for example. The Bluelink app is your remote link to the car.

The app communicates with your car, bringing you key data such as your charging schedule which allows you to program start and stop charging times, and to make sure that your car is charged when you are ready to go. You can even plan your route in the comfort of your own home or office, then send it to the navigation system in your IONIQ 5 so it’s ready and waiting for you.

There are 3 driving modes to choose from, eco, normal and sport. As with the EV6 this is a decently quick car (0-60 in around 7 seconds) rather than something to challenge a supercar at the traffic light grand prix. The AWD variant has a 0-60 time of 5.2 seconds if you feel the need for more speed, but the RWD car will be more than adequate for most and can really build speed impressively once rolling.

The IONIQ 5 rides softer than its competitor and I found its ability to soak up the bumps was really first class. Nearly everyone that was in the car over the weekend commented on the comfort of the ride and it handled our Sunday drive on some rough roads through the Mournes superbly.

It feels like car design is moving from a period of – safe but bland – to something much more interesting and both Korean manufacturers have produced vehicles that elicit an emotional response.

The IONIQ 5 is much bigger than it looks in some photos (4.6m long x 2.1m wide x 1.6m tall) and its angular lines create another unmistakably unique shape. I particularly love the pixelated LED headlights and tail lights which somehow manage to pull off feeling 80s retro cool and ultra-modern high tech at the same time.

In another less-obvious similarity to the EV6, the IONIQ 5 has a clam-shell bonnet. That moves the shut lines from the top surface to the front wings which gives a much cleaner look and reminds me of why cars like the E30 BMW looked so good compared to some of their modern counterparts.

The 400V / 800V system in the IONIQ 5 supports 350kW ultra fast rapid chargers which will bring it from 10% to 80% in 18 minutes, or add 62 miles of range in just 5 minutes. With the more common 50kW rapids we have here 10% to 80% will take an hour and you’ll add around 17 miles in 5 minutes. The car’s nav system suggested local chargers to us including those on the ESB network. This car features the same regen paddles behind the steering wheel as the Kia, allowing you to select right down to the i-pedal setting for one pedal driving mode, which is where I kept the car for most of the weekend.

Hyundai’s EV lineage includes the highly regarded Kona which, along with the original IONIQ, is one of the most efficient EVs out there. The IONIQ 5 is available with a 58kWh battery (Standard Range) or the 72.6 kWh battery (Long Range) version we tested here, which Hyundai says is good for “up to 298 miles”.

Our car was riding on 19″ wheels and this weekend’s drive was in much colder temperatures than last time (ranging from around 0-6 degrees) as well as being very windy as storm Arwen made an unwelcomed visit to these shores. Over our 3 days and 200 miles with the car we saw it average 3.2 miles per kWh.

Checking in with the EV Database again, their real world range for this RWD Long Range model is quoted as 240 miles and that sounds like a sensible average to us. The optional Eco Pack adds a battery heater and heat pump for £1,195 if you need to eke out more range in the winter.

The Hyundai comes with a 5-Year unlimited mileage warranty, extending to 8 years or 100,000 miles for the battery pack. Unsurprisingly the IONIQ 5 has much in common with its Kia cousin. It’s a well built, large 5-door family crossover with great tech, good range and all wrapped in another distinctive design.

But which one is best? That’s a very subjective choice and will depend on how much importance you place on the features of each car, as well as your budget. If you are trying to decide between these 2 Korean contenders then I’d say definitely book a test drive. You certainly won’t be disappointed by either.

Prices for the IONIQ 5 start from £36,995 with the RWD Long Range Premium spec tested here at £41,890. Many thanks to the Charles Hurst Group for the loan of the car for this review.