We Talk to eCarNI About Grants, ICE’d Spaces and Charger Demand 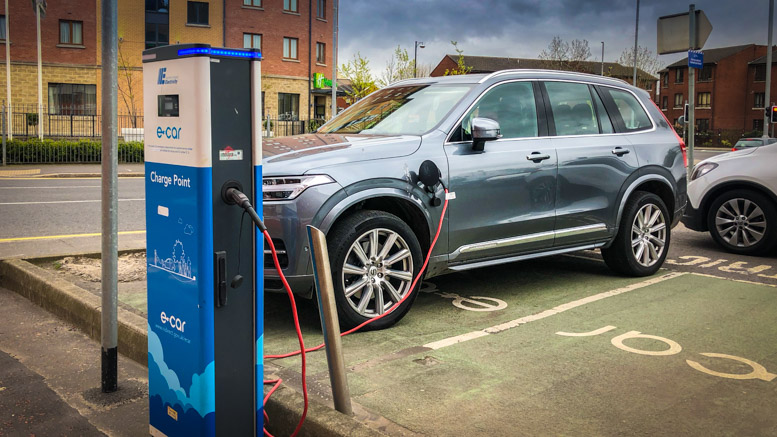 The UK government are baffled by the poor uptake of grant funding from the Department for Transport’s On-Street Residential Chargepoint Scheme. More than a year after it had launched only 5 councils in the entire UK had received funding from the scheme.

With many people living in apartments on-street charging is an important part of the transition to electric vehicles. EV owners are crying out for investment in CPs, the government is pleading for councils to take their money, and yet nothing is happening, so what’s up? We decided to take a look…

We talked to the eCar Project Manager in Belfast, David Strain. It’s clear his small team at the Department for Infrastructure is working to make the most of their limited resources as they deal with the needs of EVs drivers, as well as look towards the future with things like Hydrogen refueling points and the Automated and Electric Vehicles Bill. David told us he is committed to obtaining every bit of funding he can for the province.

The eCar team pointed out that most EVs are plugin hybrids, (PHEVs) not battery electric vehicle (full EVs or BEVs).

Of course many full EV drivers have started off with a PHEV before committing to dropping the ICE completely. It’s an understandable ‘toe in the water’ and is also more practical for single car families waiting for the next gen BEVs with 200+ mile range.

We contacted the Society of Motor Manufacturers and Traders (SMMT) for their data which shows that in the UK in 2017 around 7 out of every 10 vehicles eligible for the plugin grant were PHEVs with the other 3 being BEVs.

We wonder if the latest OLEV data available shows the full picture for EV numbers in Northern Ireland? Anecdotally a local dealer told us they sold nearly 40 second-hand Nissan Leafs in a single month last year. These cars were brought over from Great Britain, so are they even showing in the data as EVs registered in Northern Ireland?

eCars say the current network in Northern Ireland is deemed ‘fit for purpose’ until at least 2019-2020. The officially quoted figure of 336 chargers in Northern Ireland does not mean 336 separate locations. This total is made up of 160 double-headed 22kW fast charge points and 16 50kW rapid charge points (eCar is working with councils to paint a 2nd green space where missing on the doubled headed 22’s).

Most people would agree that more rapids are required, but David pointed out there is no one to pay for them currently. According to an ESB representative new rapid chargers start at around £20,000. However that’s just the pysical unit, the costs for the civil works etc usually mean a new site ends up around double that figure (£40,000). Lets hope some of this investment is on the way.

We were most surprised that the eCar team felt that the network is currently underutilised, often mentioning “no demand” during our conversation.

We pointed out that was not our members experience. Often chargers are down or ICE’d and so usage figures cannot represent a true picture of need.

Here’s SC37 at a Hotel in Newry for example. We contacted the hotel to ask why this charger is often blocked by ICE cars and they told us…

I appreciate your frustration, however our car park is a private car park and the charging points were placed as a courtesy. It is not mandatory that we have them therefore any of our patrons can use the spaces.

It certainly is frustrating to see infrastructure installed on the ecar charger scheme often become blocked to EV drivers like this.

We contacted ESB to ask how often this particuar charger is being used. They told us the highest usage in recent times was 7 charges in a full week. Some weeks have been 0 charges. Other weeks were around 4 charges or similar. Clearly not efficient use of such an expensive investment.

But did these private businesses agree to keep their EV spaces accessible when they allowed the chargers onto their sites? We asked the eCar team in Belfast…

When we were looking for sites for 170 charge points we didn’t have land suitable for them all and had to approach people at locations we thought would be most useful. They absolutely do not have any obligation to keep these spaces clear for EV drivers.

Disappointing. David told us that public complaints about chargers like this may actually discourage private companies from installing them in the future.

Back to grants, and eCar explained that Northern Ireland is often losing out when trying to obtain OLEV funding and so are pushing for more regional based schemes.

For example the team submitted a bid to the ‘Go Ultra Low Cities’ scheme and after a year of work were shortlisted in the final 12 with proposals to promote EVs, car pooling and a diesel scrapage scheme. However as much of the judging criteria was measured on the size of the outcome, NI lost out to larger UK regions like London and Milton Keynes. Clearly it’s impossible for a small region like NI to compete on these terms.

For the On-Street Residential Chargepoint Grant, Northern Ireland Councils are again at considerable disadvantage. As one council put it to us…

…Council’s do not own or operate on-street car parking functions and therefore do not have the capability of installing additional charging points without a change in the existing legislation.

Currently the Department for Infrastructure are responsible for on-street car parking (checkout the document on this page for information on the 16 locations that currently have on-street chargers in Northern Ireland). David told us…

This also needs to be considered alongside the fact that the Departments role is not to act as a charge point provider – the market should provide the impetus for future commercial operation. However, Councils could act as partners in any project if they wanted to help provide infrastructure for their constituents and are prepared to manage contracts with providers post installation. It is not just councils who could provide such arrangements, private developers, NIHE, Housing Associations for example could also consider their needs where home charging is not an option for their tenants.

We certainly encourage the relevant departments to make it a requirement for developers to install chargers in order to obtain planning permission.

David also pointed out that these residential on-street chargers are mostly implemented using lamp posts in GB. According to him this would not be possible here because the different way most street lighting is wired in NI means there’s only power to lamp-posts while the lights are on.

Another one of the requirements for the DfT Residential Chargepoint Grant is the ability to ‘demonstrate demand’. Once again the eCar Belfast team told us they could not do this.

Often the urban / suburban users who are most suited to lower range EVs live in flats, apartments and other housing with no off-street parking. We should be encouraging them to consider EV ownership. But are we really saying these people should be buying EVs with no way to charge them, then start complaining and then at that point a demand will be demonstrated?

EV uptake versus charger roll out is a classic chicken and egg situation that these grants were created to overcome. However, just like the Work Place Charger Grant fiasco, it’s clearly not working as intended.

How Can We Help

We would like to support the eCar team in its bid to lobby for change.

Many thanks to David for taking the time to talk to us at such length. We look forward to our next meeting with the eCarNI team in Belfast.